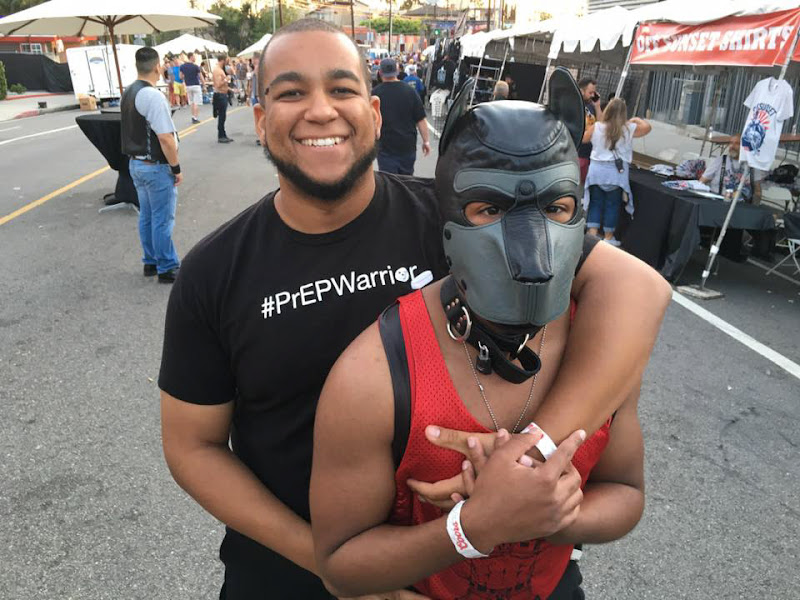 Today I want to introduce the wonderfully open and welcoming Pup Beacon. A human pup I had the chance to meet in LA.

He was kind enough to share not one experience but two. Firstly is his experience in human pup play and secondly his own personal experience in being a PrEP educator and advocate in his local community.

You can check out The Mutt Pack LA Here.

You can learn more about PrEP in this post @ The Pup Safe Project. PrEP For HIV Prevention

Gpup: Could you introduce yourself and tell us where you’re from.

Beacon: Sure. “Herro”. My name if Pup Beacon. I live in LA. Long Beach specifically. I am originally from Northern California but I’ve been living down here for about 10 years.

Gpup: Okay. You identify as a human pup.

Gpup: How did you become introduced to the pup community?

I tried talking to him about pup play and he was simply grossed out which I’m finding is actually a reaction that a lot of pups have had when they’ve tried to tell a significant other about pup play which I don’t understand that. Having gone through it I kind of understand where they’re coming from. I had that reaction. Thankfully it didn’t deter me from exploring it further but once we broke up ironically not soon after we had our conversation, once we broke up it was like, “Okay. Game on. This is happening. I’m going to exploring pup play and any other number of other things that I explored.”

Gpup: Excellent. What are 3 things that drive your passion to human pup play?

Beacon: Interesting. The main thing that I enjoy about pup play is just that it’s … To me, it’s just very joyful and very happy, right? Whenever I’m pupping out or I see other people pupping out or I’m handling other pups, there’s just so much joy, so much warmth and it’s just such a positive environment. That’s one of the things I absolutely love about it. It’s a good way to center one’s self and kind of focus on the present, focus on the now as opposed to everything else that’s going to on in someone’s life, work, school, family, friends, whatever. Just to be able to focus on that super delicious squeaky toy that’s right in front of you that you just want to chew on forever. It’s so awesome. It’s just such a great release and it’s wonderful and also pups are just really, really fucking hot. If there’s pup butts in the air, then it’s a good time.

Gpup: You’d be out sniffing.

Gpup: It does. I’ve been to dog parks. I’ve seen this happen.

Beacon: Yes. It happens for the bio dogs. Why can’t we do it?

Gpup: Do you have any particular breed identity?

Beacon: No. Whenever I see like on Puppy 101 on Facebook or whenever anyone’s asking about breed or identity, that’s not something that I’ve really spend a lot of time thinking about. Yeah. I just identify as Pup Beacon. That’s it. Yeah.

Gpup: How would you describe Pup Beacon being different to your normal persona?

Beacon: I’m starting to see them kind of merge a little bit. Whenever I’m pupping out which admittedly it’s been a little while since I’ve done for various reasons but I’m very … I get cuddly. I like to cuddle up and wrestle around and look after especially the smaller or the younger pups. That’s something that I do in my normal life. I try to look after younger pups or at least anyone that’s kind of coming up in the Kink world. If I’m able to latch onto someone and just make sure that they’re doing okay, if they’re feeling okay, I’m very cuddly when it comes to anyone that I meet. If there’s an opportunity for cuddles, I’m not going to turn them down.

Gpup: Do you identify with the more alpha role?

Beacon: Really. Yeah. I was in a leather family for a couple of years and since being on my own, I’ve been exploring like my dog side and my alpha side a little bit more. I haven’t really pupped out in awhile but whenever I go to pup moshes, I’m typically just looking out for all the pups. Giving a lot of scratches and back rubs and making sure that the other pups are getting enough to drink and resting and that sort of thing which is kind of like a handler often type role.

Gpup: For some people human pup play is almost a transitory event. They may be introduced to Kink through pup play and then they may take on other roles. You mentioned that you’re exploring your dom side. Do you still have the same connection with the pup stuff as well?

Beacon: In general yeah. Right now, I’ve been training a puppy. Definitely doing pup stuff with them. We do other Kink stuff. Last weekend we were out a couple of workshops doing CBT and nipple play but before that, we were at the off sunset festival back in April. Yeah. I guess it was April. They had a pup mosh. My puppy moshed out and I was taking care of him and making sure that he was okay. Pup play is very much still a part of my identity and something that is an interest of me as a dog as well.

Gpup: Fantastic. What would recommend to anybody that was interested in pup play but unsure where to start?

Beacon: The first place that I start apart from all the erotica that I read was just finding people online that were experienced in pup play. The first doms that I played with I found off of RECON or FetLife. It’s really easy on those websites to kind of list the interests of the individuals. If you go on someone’s profile and they say that they’re into pup play and they have pictures on their profile of either being a pup and pupping out or handling other pups, it’s like, “Okay. That guy is in a pup play.” That’s kind of a good place to start and ask them questions and see if you can have that experience with them. That’s a good way to start. I want to give a shout out to our LA puppy, Pup Zero. He is absolutely one of my favorite puppies especially in LA. I don’t know as many puppies outside of that but he’s definitely one of my favorite puppies. He’s adorable. He’s very sweet. He is a good person especially for anyone that lives in LA to talk to, to ask questions about how to get into pup play and everything.

Beacon: We do. It’s Mutt Pack LA is our Facebook page. That’s for primarily those of us that live in LA but there’s also a lot of other like in San Diego or Northern California that kind of stretches the boundaries of who’s on in the group.

Gpup: What’s the pup scene like here in LA?

Beacon: It’s been growing over the past couple of years. My former pup Ruther who I’m so very close to, when I first got into that leather family, there were very few of us that were out moshing about. at least that we’re out moshing in public. There were more that weren’t necessarily out in public but those of us that were moshing … You go to a mosh a handful of years ago, there’s only a handful or 2 puppies running around. Fewer than ten. What have you. Our LA Leather Week that culminate with Off Sunset which I referenced earlier, we had a puppy mosh, a puppy event leading up to LA Leather Pride. The entire bar was just packed full of puppies which was amazing. A lot of little pup butts running around. It was adorable. The pup scene has definitely exploded like crazy in the past couple of years. It’s really nice to have a bar like the Bullet to kind of be the home of the pups. They have more or less a permanent mosh space for us at the bar. It’s really nice to have that support from the community.

Gpup: It sounds like the other Kink community so the leather community they’re open to the entrance of the pups.

Beacon: Yeah. Absolutely. We have had a lot of … There’s a group called Avatar in LA that does a lot of workshops and demos about Kink and they’ve had some pups do some pup play demos for the group. When you have groups like that have been around for an awful long time that are supporting pup play, it says a lot.

Gpup: Do you think there are any frustrations within the pup community currently?

Beacon: I don’t know. I don’t know if I necessarily insight into that particular question. Yeah. Personally I don’t really have a lot of frustration. I really, really love observing all the new puppies that are coming onto the scene and seen how they’re expressing their pup side. In a way it’s a little bit different. Like you said earlier that a lot of pups are exploring Kink first from pup play. For myself, I explored a lot of other Kinks before I started doing pup play. It’s interesting when you have 2 different people entering the same zone but from different entrances. They bring different things to the table and then they learn different things along the way. It’s really interesting to watch those pups and see how they evolve and how they grow and what their journey is. It’s different from my journey and obviously everyone’s journey is different. It’s really interesting to see how different their journey is. If there’s any opportunity where I can give cuddle, scratches or advice to answer questions whatever, then I absolutely enjoy it.

Gpup: Cool. Where do you see human pup play in the next 5 to 10 years?

I think at some point in time if people are going to be so familiar with it, then you don’t really have to look at what’s going on over there in the crowd just because everyone knows about it which is a good thing.

Gpup: I look forward to seeing what it’s going to be like in the next few years. It sounds like you will still be there whether you’re …

Beacon: I sure hope so.

Gpup: When you’re hogging the leash or on the mats.

Beacon: My name is Pup Beacon on Facebook, RECON, FetLife. That’s the easiest way to do it.

Gpup: You must have gone in early to be able to claim all of those.

Beacon: I guess so. I kind of survived the Facebook purge. I hope no one from Facebook is watching this video but I know that a lot of pup profiles got deleted. I think during that whole purge process my profile was inactive and so kind of slipped up under the radar.

Gpup: I really appreciate you taking the time to catch up and to share your thoughts. Thank you very much.