You are here: Home > news > Building A Great Relationship With Your Human Pup Handler.
By Gpup on June 17, 2016 in Puppy Play 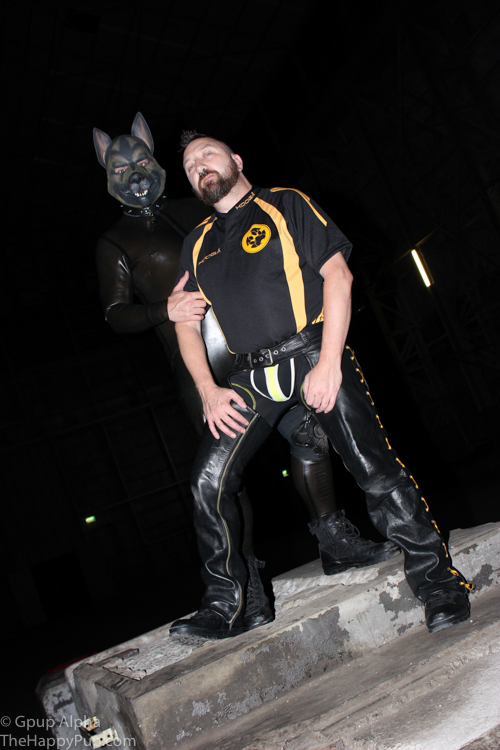 How To Relate To Your Pup Handler

In this video Pup Bolt and I had the chance to catch up when I was visiting Seattle. This is part of an hour long conversation that was way too long to be included as part of his show “Watt’s The Safeword” he does with Pup Amp. In this section we talk about the importance to clear communication between the pup and a human pup handler.

Bolt was kind enough to allow me to be able to share parts of the recording. Thanks mate!

In this section we talk about the important relationship between pup and handler in human pup play.

Most importantly we cover negotiation and how it needs to happen before the power dynamic of puppy to trainer happens. You need to work out what is going to be happening before you are on all fours!!

To transact simply means to exchange something. Like any form of negotiation, a transaction in pup play works as a process in which you, or the “other”, offers something, expects something in return, and it is either accepted or rejected. It is very simple.

As a pup you will keep it simple. You will offer something and make a demand. The “other” weighs up what it will cost him to fulfill this. If it balances, if it seems a fair exchange, then the “transaction” goes ahead. If it doesn’t balance right, the negotiation continues. Your Trainer might make a demand of you, while offering you something in return. You must consider what it means to take what’s on offer and what it means to comply with the demand. Unlike some forms of BDSM, in this pup play, both sides have to exchange and get something out of it.

Remember both you the pup and the pup handler have the opportunity to define and explore what you want to happen in your scene.

“Ask for what you want, make and offer of what you are willing to give and then negotiate. Transact!”

Gpup Alpha: That’s kind of an interesting one, because being a handler is not necessarily a sexual role. For me, there is sexual charge to human pup play, but a lot of people don’t like sex and pup play being together.

Gpup Alpha: I think if you’re in that head space, then that presence of now, that being focused on the sensory, I think can be really good as a sexual thing, but a handler doesn’t necessarily have a sexual role. One of the big questions is “Are they my partner?” No, they’re your handler. A lot of people worry that if they have a handler, does that mean that they’re cheating on their boyfriend and all that sort of stuff.

Pup Bolt: I wish Amp was here to discuss this, because he’s got the handler and he’s single. Not with me, guys. I’m not dating him. I don’t like that.

Gpup Alpha: I’m in a unique position in that my partner is also my trainer and handler as well, but I think it’s just important that you’re aware that it’s about negotiating. You can negotiate the role. As pup, it’s really important that when you meet with your handler initially is that you talk about what you want to get out of it. I’m a big believer in transaction, and that’s one of the things that we teach our pups, is that you need to learn to transact as a human pup.

Gpup Alpha: Do you guys …

Pup Bolt: No, I’m not even familiar with … What is the term “transact”?

Gpup Alpha: Transaction is an acting term. Human pup play, there’s a lot of acting in it.

Gpup Alpha: If you throw yourself into the role, then you can really enjoy it. A transaction is “What do I want?” Decide what you want. Then you decide “What am I wiling to give to get what I want?” You would say to your handler, “Today I would like to have a bit of a pup wrestle and as part of that, I am willing to also do some training with you as well,” or “I’m willing for you to do some photography,” or stuff like that. Transaction can work in a lot of different things, so if I’m talking with somebody in a work environment, when you learn transaction, you quickly learn … If somebody’s offering you a deal, he’s saying, “I would like you to do X, Y, and Z for me,” and then you can go back and say, “I am willing to do X, Y, and Z. However, I will need you to … Could you please make sure that the calendar’s clear, that I’ll have time to do that?”

With transaction as well, it’s not hard and fast. You can say, “This is what I want. This is what I’m willing to do,” and then you negotiate the differences.

Gpup Alpha: Yeah, absolutely. Pups, this negotiation happens with you standing on two feet. Don’t do it when you’re on the pup floor. You’ve got to do it before you go into that.

Gpup Alpha: If you don’t like the answers that you’re getting, that’s a really good time to say, “Look, it sounds great, but I think I left the iron on at home.”

Gpup Alpha: “The only answer you can give me is yes or no.” I don’t know who wrote that bot, but …

Gpup Alpha: Could you imagine that person as a handler?

Pup Bolt: As an actual …

Gpup Alpha: “You will sit in the corner and look at the floor.” It’s like, this is going to be a really fun session.

Gpup Alpha: Yeah, yeah. When you’re meeting a handler, consider it a job interview. It’s for both people. You’re getting to know each other and to see whether you actually match.

Pup Bolt: Kind of like a date. It is a relationship thing, but it’s not the same as a date.

Gpup Alpha: It’s not the same. It’s a little bit of a different date. After … When you’ve been a pup long enough, it’s a date. It’s like, all right, yeah, sure, we met, we had a bit of a pup play. I think it is important that you treat it as if you’re going into a relationship, because there is going to be … You’re going to be putting yourself into a vulnerable position, so it’s important. For you to be able to enjoy being vulnerable, you have to feel safe. If you don’t feel safe with somebody, then you’re probably right.

Gpup Alpha: Yeah. Now remember to be able to differentiate between anxiety and butterflies of anticipation on what’s going to happen and fear. Sometimes your trainer might say to you, “Today, we’re going to try this slightly bigger tail.” Some people will be a bit anxious about that, but they’ll go, “Okay.”

Gpup Alpha: You need to be able to go, “That’s not going to happen. You can hit me on the head with that as much as you like. It’s not going up my ass.”

Pup Bolt: There’s clearly an exchange there. You got to trust them, and if they do something that’s out of your trust, that’s not what you want, then you got to make sure you say it.

Gpup Alpha: Be clear, be articulate, because after it’s happened, it’s too late.

Pup Bolt: Just because you’re a puppy doesn’t mean you don’t have an opinion.

Gpup Alpha: Yeah. You’re a human pup. You actually have the ability to go, “You know what? I don’t want to do that.”

Gpup Alpha: Or say for example if you’ve got particular triggers. We all have things that we don’t like or it’s like, “Nope, I don’t want you to do that.” In the negotiation before you get to know a handler, you should be talking about this stuff. “I really like X, Y, and Z. I really hate A, B, C.” Be clear about it. Say what you want. Say what you don’t want, and negotiate the differences.