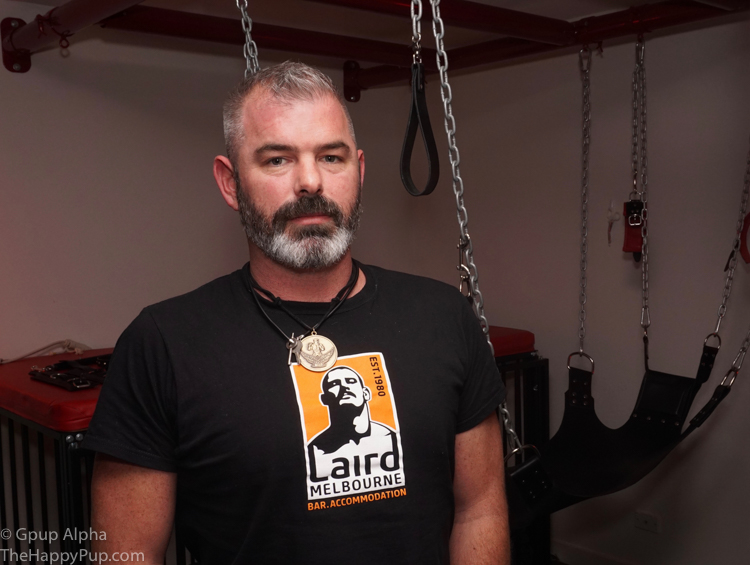 As part of a three part interview I’m proud to have had the opportunity to interview the 2015-16 Laird Leatherman Stephen Morgan.  Stephen had recently competed in IML, International Mr Leather, where he placed 9th. IML is annual event held in Chicago where it is considered the peak event for lovers of leather across the world.

Topics covered in part one:

Stephen:             My name’s Stephen Morgan. I’m the current Laird Leatherman. The title was held in August 2015. I’ve been in the leather community for a number of years. After winning my title last year, it’s really been wrapped up a little bit in terms of producing a lot more events and being a bit more visible on the leather scene than what I was previously.

Stephen:             I was introduced, it was almost twenty years ago now, through a mentor that said, “I’m going along to this party. Would you like to come along? You might enjoy it.” I went along to that and thought, “Well, this is interesting.” This is a scene that I felt comfortable in. I was a student at the time, so I couldn’t really afford the expensive gear so I taught myself how to work leather and made my first harness.

Stephen:             Which I actually managed to wear on the stage during the final of IML just a couple weeks ago.

Stephen:             Yeah. I’ve been kicking around in the cupboard. Still in good condition, and I thought it’d be fitting to wear that.

Stephen:             Never. I love being in a room full of men in formal leather. It’s just the sense of belonging and being … I find it really attractive.

Stephen:             No necessarily bluff, but rather than … I’d much rather be in a bar with guys that are fully clad in leather as opposed to being on a dance floor with a whole lot of guys in harnesses and jock straps.

Stephen:             It’s probably the bar scene that I find resonates more with me because of the communications that you can have with people in that environment.

Gpup:                   Okay. Some people see leather as, there’s the lifestyle aspects of it, and then there are people who fetishize the actual product, the leather, the fabric. Do you meet somewhere in the middle of that or … ?

Stephen:             Definitely somewhere in the middle in that respect. The lifestyle I’m attracted to because it’s really a sex positive lifestyle. People are not ashamed of their sexuality. They’re not ashamed in talking about their sexual fetishes. They’re a lot more open in discussing their sexuality as well. Then if you put on the fetish element of it, hearing someone move in full leather and the rubbing of the leather and the feel of it. When you have it on yourself, the warmth, you get a little bit sweaty in leather. It clings to you. It makes you feel a certain way.

Gpup:                   Okay. For many, many people, leather is a sensate experience, whether it be the sound, as you mentioned, or the feeling against your body. A lot of people there’s the smell as well. Does that extend beyond leather to you? Say, for example, rubber?

Gpup:                   Absolutely. There can be tears before bed time in non-chlorinated rubber. I would imagine over twenty years you’ve gathered a small collection of leather gear.

Stephen:             Yeah. It’s what resonates with me most. My favorite piece of leather is a pair of boots that I’ve had for probably about ten, fifteen years. They were bought secondhand in a disposal store in Berlin. They’re full patrol boots, so without any zips or buckles. You’ve got to work to get them on, which is, I think, part of the appeal. I’ve put those on in that store and they fitted me like a glove. It was like someone had worn those boots in for me. They’re not pristine. They’re very well looked after. They’re very well kept, but every time I put them on it’s like, “Oh.” You know. For me, it’d be like putting on a mask. It’s like I’m putting on these boots encasing everything.

Gpup:                   You’ve been in the leather scene for twenty years here in Melbourne. Why did you compete in the Laird Leatherman competition?

Stephen:             I got to a point where I wanted to give back. The reality is I’ve been through some tough times in the previous four or five years. Initially, part of my way of dealing with that was turning my back on the leather scene. It was actually my mates in the leather community that helped me get through those times. I think I reached to a point where it’s like, “This is a community that’s helped me through the tough times and it’s time for me to step up and give back a little bit more.”

I pushed it in a slightly different way. The main event that I ran, which I’ll continue to run on an annual basis with a high cow charity dinner. I was very specific in trying to make sure that that wasn’t just guys in formal leather. It was a formal and a high cal dinner. About 30% of the attendees at that were not necessarily leathermen. They were people, and some quite well respected senior members of our community, that came along and got to experience what it was like to be in a room full of men with leather. The feedback from them was fantastic. It really did take away some of their misconceptions of the leather community.

Another high point in the previous year was getting to address a charity function. I was speaking with Rowena Allen, which is our commissioner for gender equality appointed by the state government. She spoke and I spoke. Then afterwards we got to have a really good discourse. We’ve managed to keep in touch. It’s been a little bit of to and fro. What really struck me was that she said, “Is there anything that the commissioner can do for the leather community?” To be able to build that bridge is something that I’ve felt really quite …

Stephen:             I spoke mostly about my story. Often in a public speaking context. If you can just describe your story or your … I always [inaudible 00:08:43] about using the term journey. It comes across as very authentic and people resonate with that. People find that often much more interesting than pushing just forward on a particular issue or topic or an agenda.

Stephen:             I think one of the biggest issues we’ll be facing over the next particularly two months, depending on the results of the election, is the effects running a plebiscite will have on the suicide rates of LGBTA. From what I’ve heard is with the recent attack on the Safe Schools Coalition, the number of suicides actually peaked at that. That sends a very damaging message to particularly young people. It doesn’t necessarily mean young in age, but young people in terms of where they are on their gay or lesbian timeline. If you’ve got the government saying your sexuality is bad, your sexuality is wrong, then that message is going to filter through. If we can try and mitigate some of those concerns during the plebiscite, if the little government gets in, it’ll be helpful for the community. That’s probably one of the most pressing issues facing the LGBTA community.

Stephen:             Yeah, with Orlando. I don’t believe it’s a terrorist attack. I believe it is someone who was raised with a religion that taught them that they were wrong, that their sexuality was wrong, and that their inability to accept their own sexuality was enough for them to flip into the role of a killer to deal with their own self-hatred and self-loathing. My biggest concern with that is the availability of assault-type weapons in the USA because that’s what facilitates the ability for these events to happen.

Gpup:                   Absolutely. I don’t want to go into the politics of guns, but certainly we can see in societies that don’t have access to guns. They don’t tend to have mass shootings. Japan, Australia, two very clear examples of lack of access to gun greatly reduces the pool of access and [inaudible 00:11:47]. For all of the NRA members who just switched off this thing, we can continue the interview.

Stephen:             I have no [conerns 00:11:54] in the NRA, but that’s coming from the Australian perspective where we don’t have that same idealization of guns as being necessary.

Gpup:                   We certainly don’t have a legal statute that says you have a right to carry a gun as well. You enter the Laird Leatherman competition. Were you expecting to win?

Stephen:             No. I went in it for a lot of fun. Again, trying to explain what the lead-up to a contest is like is, again, where most of the enjoyment comes from. In Melbourne we had a Facebook group that was a whole lot of banter. What it does is it allows the people that are competing together for a title to bond in a way that you don’t get as easily in just day-to-day contact. Out of eleven, I got five good mates that …

Stephen:             I think that gap’s starting to be filled. Thankfully we’ve had close to a generation of people not being wiped out through AIDS. That means there’s a lot more experience in the community now than what there might have been say ten or fifteen years ago where the worst of of the AIDS crisis. Having role models for younger people to look up to is kind of important. If they don’t have them, then there is no path to follow. This is probably leading towards the old god and new god. I’ve got some pretty interesting ideas in this, but the old god, I think as an idea of having a committee of people that set traditions and things is probably a bit of a fallacy and not something that actually happened. When you’ve got a vacuum of information, then it’s very easy to mythologize something that people would want.

Gpup:                   I think there’s stuff to be learned from protocol, though, and respect. I think there are some new members of various fetishes, whether that be … I come from a leather pup play perspective. I think that within the pup community we’ve learned respect and protocol and care of colors, and things like that. I think that from what I can understand, protocols are a very useful thing. As for a table of elders making decisions, well I’ve yet to see strong evidence of that.

Stephen:             We’ve got as much to learn from them as they’ve got to learn from us. I think that mutual respect is something that’s going to encourage a lot more younger people to get involved with the leather community.