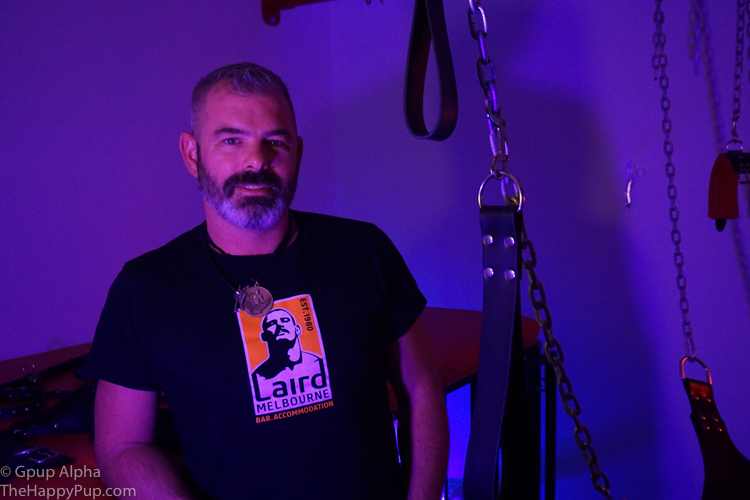 Today I share the final part of the 3 part interview with Stephen Morgan, Laird Leatherman 2015-16.

Stephen: Yeah. That’s not the main focus of it.

Stephen: In regards to the leather image section?

Stephen: Leather image is not limited to just cow. Leatherman image is not just limited to hide. The classic of a leatherman going back to the seventies and eighties usually involves a black t-shirt, a bar vest and a pair of blue jeans. There’s not that much hide in that. I think if someone can carry off an image that represents the leather community, it doesn’t matter if they’re not wearing that much leather or not.

Gpup: If we look at your shirt, that is an example of the almost prototype leather man of the past say, that it’s a masculine image, with or without facial hair, but generally it’s. Now if we were to contrast that with say somebody wearing leather corset, how does that sit in the context of the IML competition?

Stephen: I think there’s scope in the IML competition to encourage not just masculine expressions of leather, which was probably made last year with Tuga with the high heals and the corset. There was a couple this year that were expressing themselves.

Stephen: Yeah, in both cases it was. They happened to love leather, but they have a more feminine side to their personalities. They were on stage being themselves, and I’d much rather see that than someone who’d much rather be in a corset standing out there in a pair of chaps.

Gpup: Yeah, yeah. Okay. I think that was one of the things that I noticed, because I don’t know these people, it’s really hard to do it from a Twitter feed isn’t it?

Gpup: If wearing a corset is them, if I went and visited their home and they’re strutting around vacuuming in their corset …

Stephen: Jeremy said I’d love to have a zero win twice, it’s just exist in a corset. It’s like you go, you earned that. It’s yours and that’s how you … If that’s how you fantasize leather, then you should have every right to be able to express them in that way.

Gpup: Absolutely, it’s not like Violet and Chapsky has the exclusive rights to corsets in America. Okay. I was going through the contestants, and it’s a fairly white male event when you look at it from a very superficial point of view. I had a really interesting interview with one of the Onyx brothers and fascinating and so wonderful to hear of the strength that’s coming from that group. There were a few guys of Asian decent as well. Do you think that there’s room for more diversity within the leather community?

Gpup: Okay, so you’d say it is a fair reflection of this is how it is currently?

Stephen: It’s much grander in scale. That’s the first glaringly obvious thing. I think there’s geographical variations in the US leather scene, from east to west coast, from northeast to southeast.

Stephen: I haven’t been to all those communities. I’m judging this on the basis of how they were represented to me through the contestants that I know. I spent time in New York, I spent time in San Francisco, a little bit of time in Miami, so I haven’t actually seen a lot of the non sort of main touristy cities in the US. Melbourne’s got a really strong leather scene that is up there with everything that I’ve seen anywhere else in terms of diversity, in terms of size, and in terms of community involvement with those that are in the leather community here. I think that you can divide the leather community in the states into the party community and those that take it a lot more seriously. I think that division’s comparable to here as well.

Gpup: Say for example, if you go to one of the local leather parties, that you’re going to have people that you know, you’ve arrived and you know well okay these are established people within the community and I know them well, and then you will see some people who might still have the swing tag hanging from their mandatory piece of leather. A similar comparison has been made within the pup community as well, but I wonder, these are the people who we’re going to need to foster because …

Stephen: I was one of those people at one point, where I went to a party up with the Birdheims, but I found a community that I resonated with. Not everyone has a full kit of gear when they first go out.

Stephen: It is very expensive. It’s probably why you see the rising popularity of the rubber community with the younger guys, it’s because that it is more economically accessible. At the same time, I don’t think it’s fair to be dismissive in any way, shape or form with those people because they are …

Gpup: Within the leather community, there’s a lot of crossover, and one of the big crossovers is, and it’s a community you’ve had connection with as well as the pup community. What was IML like from a handler perspective?

Stephen: There were a lot of pups there. The popularity of pup play is growing and growing and growing and is becoming a very integral part to the leather community as well. I was actually waiting for my interview at the time, but they had a discussion on leather  pup play, and that they had allowed a certain sized venue within the hotel. They had that to capacity and twice over, which gives an idea of how interested people are in it. It’s really great to see the diversity of the hoods that have been developed and how much more intricate they’re getting, which means people can express their own identities, rather than having a generic off-the-shelf hood in black. Which was where things were at not too long ago. I think the pup community assimilates well with the broader leather community, and is integral particularly from a handlers point of view. It does sort of sit quite nicely.

Gpup: I think currently there’s and I think this is almost universal. I don’t know but it’s the Tupperware drawer issue that there’s lots of pups but not quite as many handlers. I wonder is this, again are we fostering new generations of handlers and leathermen and you know from a futuristic perspective, if we project ourselves forward, what do you think is some good things we can do to encourage mentorship within all pup kink communities.

Stephen: Making sure the events are inclusive is the key one. If you encourage events that are say are just pups, and there’s no crossover with the leather community, you might find that there are some very willing leathermen that would be handlers for pups that maybe don’t identify as pups themselves, but enjoy being in that environment. If you can cross over and cross pollinate events with different sectors of the community, you’re going to find people that resonate with one or two different elements. That will be important in creating the environment where mentorship can happen.

Gpup: I think initially some of the interface between say the pup community and the leather community was a little bit awkward, and there were some rough patches, but it would appear that that’s, everyone’s making it a safe ground now.

Stephen: Yeah. I think mostly that’s because there’s no definition of what pup play is. There’s no definition of what constitutes a good pup or a bad pup or an indifferent pup. People can get involved into that scene to the depth that they’re comfortable with. I think that’s the key thing to remember with all kink players that people are going to work within their own comfort levels. For some it might mean getting into full kit, helm, hand pads, knee pads and getting out and completely pupping out. For others it might be a way they interact in their greetings with their mates. For others it might be a more sexual role, for others it won’t be a sexual role at all. That’s something that I think, because there’s no handbook or hand guides for these kinks that have been long established. Everyone has the right to express their kink how they see fit.

Gpup: I think we forget that it’s not a zero sum game. Everyone’s able to come to the table and bring their own, it’s like pot luck really isn’t it. Pretty gross.

Stephen: Yeah. One thing I enjoy when I greet pups is to greet them in a pup manner. That doesn’t make me a pup because that’s not what I identify with.

Stephen: No. There’s that sort of element which is … That’s what’s great about bringing diversity into any community, is that we write our own rules.

Gpup: Yeah. We’ve jabbered on for some time, quite some time and I really appreciate you energy and being able to keep up with this. Perhaps in closing where do you see the leather community in the next five to ten years?

Stephen: I wish I had a crystal ball. I would like to hope that the leather community is going to … It’s going to be different to what I expect. That’s the one thing that I am sure about. I would like to hope that it’s grown. I was going to say that I hope some of the misconceptions and people’s prejudices about it would be broken down but in the other respect that’s part of the allure of the community. If it was openly on the table for everyone, I think it wouldn’t have the magic that I find with it. I’d like to think that for those who are interested in it, they have a safe place to come and explore at their own pace.

Gpup: With that in mind, if there was a young person who’s sitting at home, watching this video, and they don’t know where to start and they … No connections to the community at all, what would you recommend to them?

Stephen: You don’t have to have a … No, no. God no. Borrow something off a friend, see if you like it.

Stephen: Come along, have a look and give it a shot.

Stephen: Go through Facebook and search Laird Leatherman that would be a very easy way of doing it.

Gpup: Okay. Sounds good. Are there any closing points that you would like to share with the group?

Stephen: All I can say is get involved if you want to do it. Get out there and throw your hat into the ring, because you’ll have a good time.

Gpup: Your time is really appreciated and I look forward to hearing the response from the community from your great open and sharing in this chat.